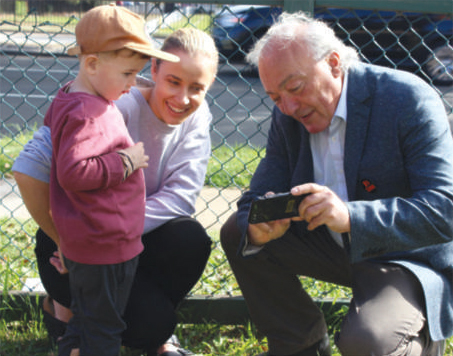 When popular local paediatrician Dr Mike Freelander put up his hand for a political run, both Macarthur and the Labor party struck gold. The “Good Doc”(as my Parliamentary friends fondly call him) doesn’t come in the mould of the transparent plastic career politician we are all so sick of. He is the real deal, someone who genuinely remembers and cares.

“I love medicine and I still work in medicine. But I realised that many of the issues confronting us need to be addressed through non medical interventions, like housing, education, and support. So, that was the main reason. And it’s been a real eye opener, he says.” I think I’ve been on a three year learning curve that’s been very steep, and I’m still learning about politics and how to get things done. I must say I’ve been very grateful for the support I’ve had in the community,’

As Dr Freelander heads into his second term as Federal Member for Macarthur with 58.4 per cent of the two-candidate preferred vote, he sees three major issues currently confronting his electorate. “Number one is getting infrastructure in place before we have more development. Number two, we must protect our environment, and Number three, and this is a big one to me, we must do more with our education system, and make sure our kids are competing with the rest of the world on an even basis. I heard the other day that we have 30,000 more electors this election than we did three years ago, so that’s a massive increase in the people coming in to the area, and we need to be providing for them?

Over his term in politics, Dr Freelander believes that his biggest contribution to the community has been to try and support people in getting access to housing and the NDIS, as well as making the needs of Macarthur more widely known. “My belief is that governments of all persuasions over a long period of time have allowed a lot of development to occur in the Macarthur area without putting in place the infrastructure that we need,

and I see my role now as being very important in trying to get that infrastructure in place before the development of goods,’ he says.

Mental illness is becoming more common across Australia and Macarthur is no exception. The Black Dog Institute has it that now one in five (20%) Australians aged 16-85 experience a mental illness in any year. And this is where you can sense that Freelander the MP and Freelander the Doctor come together strongly as one.

“I have a personal view that mental health issues have become so significant in our society, we really do need to have some inquiry or even a royal commission into how we deal with mental health, what are the research options we should be taking to look at the reason why we’re seeing so much more mental health problems, and how we can better have integrated systems of care. This is something that I’ve been pushing very, very strongly for in our caucus.’

Appin Road, protecting our Koalas, climate change, upgrading our sporting facilities, are the usual suspects that pop up into any such conversation – because seriously, they absolutely must — leading Dr Freelander to state, “I’m a strong believer in that we need to leave our land in good condition for our children and for those in the generations that are following, and it’s almost getting too late to protect our environment and a healthy lifestyle – and it’s urgent that we do something!”

The Biggest Constant is Change

How do you differ in Price and Service?