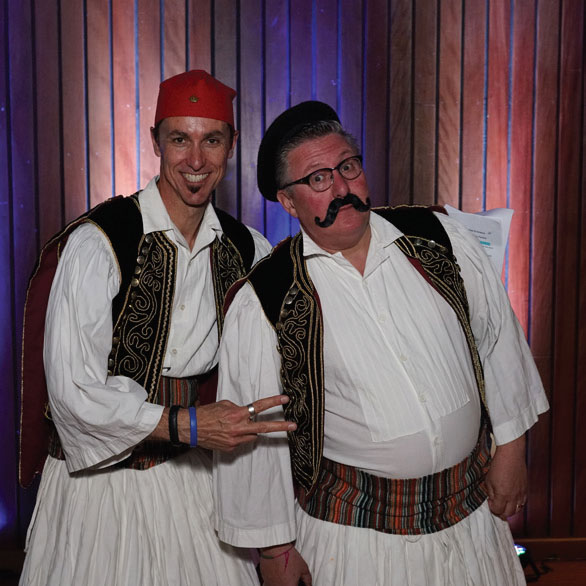 With immigration dominating the political agenda and high in the national social consciousness, the Greek community is a stellar example of the successful integration of two cultures.

Greek culture is thousands of years old and Greek communities have been established throughout the world, assimilating into their local community while proudly retaining and sharing their muchvalued traditions and celebrations.

Nowhere is this more evident than right here in the Macarthur region where the vibrant Greek community recently further strengthened its ties with a year of major cultural and social events.

Based on information in a paper written by Dr Panayiotis Diamandis a lecturer at UTS, the Australian Hellenic community traditionally dates its origins back to 1829. According to Dr Diamandis’ research, on August 27, 1829, seven young Greek men, who had been convicted of piracy, arrived in Port Jackson aboard the vessel, the Norfolk.

Antonis Manolis was assigned to work in the vineyards on the estate of William Macarthur at Camden and thus began the foundations of the thriving Greek community in Macarthur.

Antonis spent his remaining years in the Picton district and is buried in the town’s Old Anglican Cemetery, overlooking the fields he had cultivated for decades.

From those simple beginnings, the Greek community in Macarthur has thrived, businesses built and many prominent Greek businesses holding significant roles in the region and making an invaluable contribution to the local community.

The first initiative of the group was an almost year long calendar of cultural and social events under the banner, ‘The Greek Australian Experience’.

“Every event in the Greek Australian Experience, is designed to strengthen the community ties in the Greater Macarthur Area between the Australian and Greek community,” John Tsekas said.

“It included a range of activities from engaging community, local and state officials, to cultural and historical exhibitions and an outstanding Gala Dinner performance.”

The Greek Australian Experience has captured the imagination, hearts and attention of the Macarthur community as a unique, one-of-a-kind event.

“The experience has provided an increasingly rare opportunity for cross-cultural communication and engagement,” John Tsekas said.

The experience kicked off in October 2015 with the 75th commemoration of ‘Oxi Day’ at Picton Thirlmere Bargo RSL. This is a deeply meaningful event for Greeks as it was the date in World War II when Greece said NO to the Axis forces.

In February 2016 a successful Tavern night was held followed by an extremely well-supported Seniors Week event at the Campbelltown Arts Centre in April.

One of the highlights of the ‘experience’ was the ‘Life on Lemnos’ and ‘Battle of Crete’ photo exhibition which toured through several venues in the region. The committee’s Liz Kaydos was instrumental in organizing the exhibition for Lemnos 1915 and an ANZAC perspective of Life on Lemnos during WWI.

The photo exhibition debuted at Ingleburn’s Greg Percival Community Hall on the 16th June, then moved to Wollondilly Shire Hall from the 21st to the 28th August and concluded in September at Narellan Library from the 14th to the 24th September. The exhibition Attracted impressive numbers of visitors from around the region and beyond and gave Australians a valuable insight into the ties that bind Greeks and Australians.

Gala Night Celebrates All That is Greek.

The Greek Australian Experience came to an impressive climax with the gala event, ‘Window to Greece’ proudly supported by Macarthur Greeks Incorporated and held at the Camden Civic Centre on 24th September.

“The theme embraces our objectives to actively explore the history of the Greek Community and start to look into strategic sister city partnerships, showcase traditional dances and music, take a visual journey into Greece and so much more,” organizer John Tsekas explained.

The event presented the perfect occasion to meet, greet and share in the visual experience and explore Hellenic culture with other individuals and organizations from the Macarthur region.

The evening commenced with a Cocktail party, held in conjunction with the travelling photo exhibition. Representing the Joint Committee for the Battle of Crete were Mr Matt Walsh and Retired Colonel Graham Fleeton and also in attendance was Liz Kaydos, curator of part of the exhibition, from the Macarthur Greeks Committee.

Steve Wiseby and Smarter Macarthur’s own Terry Diomis were MCs for the night and the Governor of Thessaly Mr Kostas Agorastos was introduced to the guests via Skype. The committee extended him a huge vote of thanks for sending over eleven boxes of regional tourism and trade material for use during the ‘experience’ and also for introducing the Sister City concept to the audience.

The entertainment was amazing with performances by the Hellenic Institute of Dance with mainland folk dancing, Sydney Sizmos with island and Cyprian dances and performances, and with Pontian dancing to live music. The Cretan Association of NSW playing live Cretan music for all to enjoy and of course, the traditional smashing of plates to the beat of Zorba the Greek.

“We were looking to connect with creative and enthusiastic individuals who value cultural exchange and are looking to promote the Macarthur Region,” John said. “We believe that this is only one small part of one of the most important community efforts in Macarthur to strengthen and grow our region.”

John Tsekas is passionate about the Greek-Australian experience and believes that the Macarthur Region, with such a deep and rich historical past, can be the Capital of Culture by 2021.

Building Into the future

Campbelltown Council – Getting down to Business

Christmas- The Grinch tax deductions and other celebrations