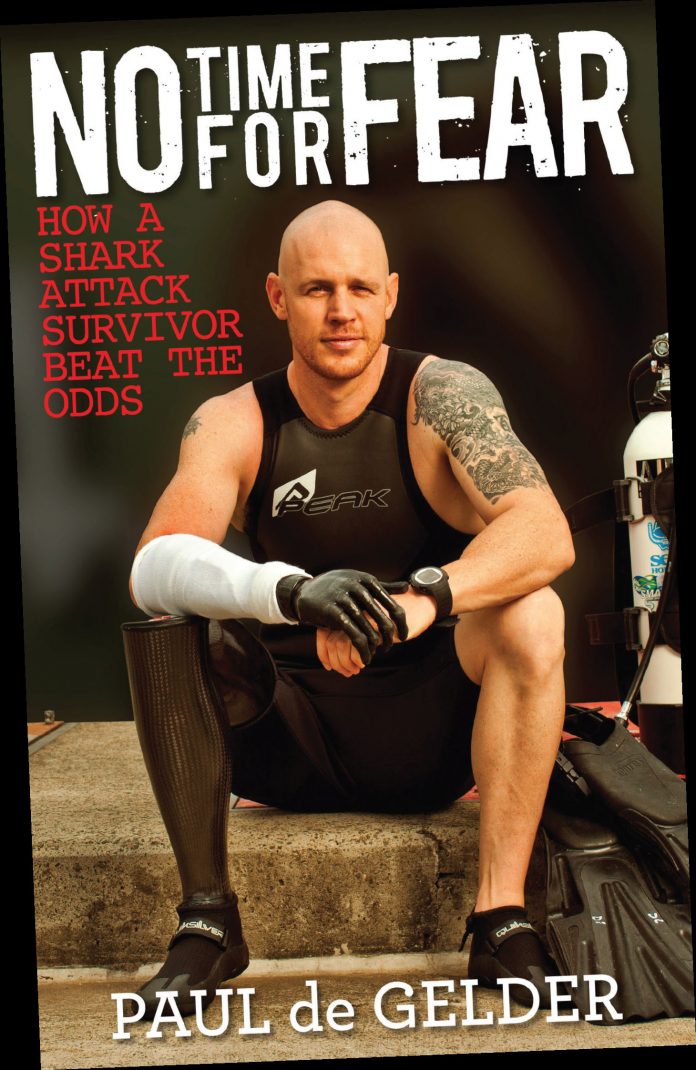 If you think you’re having a tough day at work, on 11 February 2009, Paul de Gelder went to work as a Navy clearance diver and by 7am, his entire life was changed.

Paul was carrying out his duties in Sydney Harbour when he was attacked by a 3 metre bull shark.

Viewing the video of the attack on Paul’s website is jaw-dropping, no special effects, this is the worst kind of reality TV and his recollection is confronting and shocking in its detail and clarity:

“I felt a whack on my leg and didn’t think anything of it. I thought the boat had run into me or something. Then I looked down and there was a dirty great grey shark looking at me.”

“We stared at each other for a few seconds and the fear, panic and adrenaline kicked in and I thought, all right, I’ve got to get this thing off me. I tried to go for the eyeball but couldn’t reach it, tried to pull it off but that didn’t work so I whacked it in the head and that upset it and it started shaking me around in the water. He pulled me down, I came back up, gasped for air and then he took me down again, I was pretty much a rag doll in his mouth.”

“I finally came to the surface and knew I had to get out of there so I started swimming for the safety boat, yelling at them. I tried to swim freestyle and looked up to see my hand was missing, I couldn’t figure out what was happening with my leg, I couldn’t really move it so I was effectively swimming with one hand and one leg. The boat was rushing towards me in a flash, they pulled me out of the water, relief washed over me and that’s when I passed out.”

Paul’s attack made the news headlines and the public followed his very painful recovery as he lost a hand in the attack and had to make the tough decision after a week in hospital, to have his leg amputated as the damage was too great.

Most of us would have succumbed to the situation and started the blame game. But Paul de Gelder is not like most of us. He is exceptional and greatly admired for what he did next and the way in which he took on the challenges, overcame his fears and inspires and motivates others to achieve their best.

“It was just something that happened, it was a risk of the job and if I wasn’t willing to face those risks, I shouldn’t have been there,” Paul said.

In his book, ‘No Time for Fear’, Paul provides an honest account of his life – from rebel, drug dealer and strip club worker to adventurer, soldier, fitness enthusiast and Navy diver.

He’d spent the major part of his career in the services but with two limbs lost in the shark attack, his career as a daredevil navy clearance diver was flung into jeopardy.

“I could wallow in self-pity and have a crappy life or choose to be positive, happy with what I have and spur myself on to better things,” he said.

He freely admits that he didn’t know how he was going to do it and at many stages during his tough and painful recovery he simply wanted to die. Fortunately for all those who have been inspired by this impressive 38 year old, Paul continued to live and has carved out an amazing new life and career for himself through planning and goal setting.

“You can’t expect things to happen. Everything we do is learnt, practiced and perfected and learning to utilise our emotions is no different,” Paul advises.

“I used anger to work out harder at the gym. I used pride to master walking with the prosthetic leg. I set myself little challenges, get up earlier for work and to exercise and went from there.”

With his inner strength and determination and the simplistic view if you have a problem or issue that you can’t fix, then look at the root cause, Paul was back trying to surf on one leg within 3 months and back at work not long after.

For such a tough guy, it would be easy to dismiss his remarkable recovery as easy for him, but that is not the case. He wasn’t born that way and admits that growing up, he was one of the weakest people but he made the choice, not to be.

“I got back to work which gave me a purpose,” Paul said, “but since then, every aspect of my life has changed.”

After resuming work as a Clearance diver instructor for a further 3 1/2 years because he couldn’t return to the operational dive teams, Paul’s career was stuck in the one spot with no chance of advancement and his passion began to wane, so he decided to leave the military. Paul freely admits he was terrified, he didn’t have a fall back plan from the military so he grasped opportunities as they were presented.

He was invited to public speaking engagements to recount his experience and has become a highly sought after motivational speaker for charity and business events. A situation which presented a new set of fears!

“I was terrified of public speaking, but you can’t let doubts get in your way,” Paul said. “You need to continue to challenge yourself, have goals, have challenges, which become big dreams.”

He was invited to speak at his old school in Canberra, a situation which inspired him to be a better public speaker.

“I was teaching them things about life that I wish I had known at that time of my life,” he said.

Paul’s approach is one we can all adopt: train your mind, plan, goal set.

“You can accomplish far more than you give yourself credit for,” he advises.

Be the Absolute Best You Can

Paul de Gelder is now once again, swimming with sharks, but now as a presenter of documentaries for National Geographic and Discovery Channel in the US, and has recently returned from filming a series on hammerhead sharks in the Bahamas.

A role which he absolutely loves and has made his new challenge to be the absolute best he can be in TV and film work.

He is inspiring others through his book, which he describes as not a shark attack story, not a military story but a life story about how we all can make the most of our lives, and is definitely worth a read.

“I don’t want to be known as a victim. It was a really bad experience, but it was just something that happened,” Paul said.

To read more about Paul de Gelder, grab a copy his book ‘No Time for Fear’

Also worthwhile to motivate and inspire you when you’re having a tough day at work and for details on how you can book Paul to speak at your event, visit his website www.pauldegelder.com
(Acknowledgement: excerpts taken from
www.pauldegelder.com )