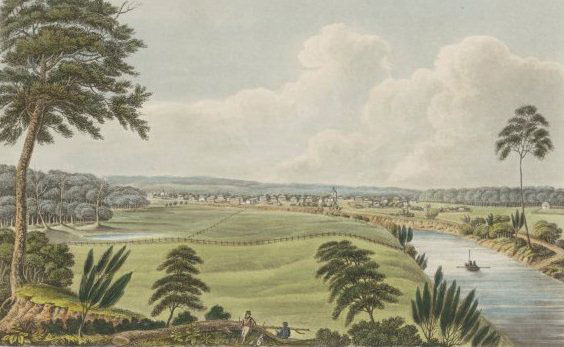 The Nepean River which drains the Macarthur region was discovered in 1789 by Captain Tench and Thomas Arndell. This discovery proved to be of great significance to the agricultural potential of the Colony of New South Wales, because the alluvial flats surrounding it proved to be much more fertile than the almost barren land around Sydney Cove. The Nepean River flowed along the foothills of the Blue Mountains, but its connection to the Hawkesbury River was not known until some 3 years later. Captain Tench wrote and published a book after his return to Great Britain and describes his expedition as follows:

“At this period I was unluckily invested with the command of the outpost at Rose Hill, which prevented me from being in the list of discoverers of the Hawkesbury. Stimulated, however, by a desire of acquiring a further knowledge of the country, on the 26th instant, accompanied by Mr. Arndell, assistant surgeon of the settlement, Mr. Lowes, surgeon’s mat of the Sirius, two marines, and a convict, I left the redoubt at day-break, pointing our march to a hill, distant five miles, in a westerly or inland direction, which commands a view of the great chain of mountains, called Carmarthen-hills, extending from north to south farther than the eye can reach. Here we paused, surveying ‘the wild abyss; pondering our voyage.’ Before us lay the trackless immeasurable desert, in awful silence. At length, after consultation, we determined to steer west and by north, by compass, the make of the land in that quarter indicating the existence of a river. We continued to march all day through a country untrodden before by an European foot. Save that a melancholy crow now and then flew croaking over head, or a kangaroo was seen toss bound at a distance, the picture of solitude was complete and undisturbed. At four o’clock in the afternoon we halted near a small pond of water, where we took up our residence for the night, lighted a fire, and prepared to cook our supper: – that was, to broil over a couple of ramrods a few slices of salt pork, and a crow which we had shot. At daylight we renewed our peregrination; and in hour after we found ourselves on the banks of a river, nearly as broad as the Thames at Putney, and apparently of great depth, the current running very slowly in a northerly direction. Vast flocks of wild ducks were swimming in the stream; but after being once fired at, they grew so shy that we could not get near them a second time. Nothing is more certain than that the sound of a gun had never before been heard within many miles of this spot.”

“We proceeded upwards, by a slow pace, through reeds, thickets, and a thousand other obstacles, which impeded our progress, over course sandy ground, which had been recently inundated, though full forty feet above the present level of the river. Traces of the natives appeared at every step, sometimes in their hunting-huts, which consist of nothing more than a large piece of bark, bent in the middle, and open at both ends, exactly resembling two cards, set up to form an acute angle; sometimes in marks on trees which they had climbed; or in squirrel traps; or, which surprised us more, from being new, in decoys for the purpose of ensnaring birds.”

“Having remained out three days, we returned to our quarters at Rose Hill, with the pleasing intelligence of our discovery. The country we had passed through we found tolerably plain, and little encumbered with underwood, except near the river side. It is entirely covered with the same sort of trees as grow near Sydney; and in some places grass springs up luxuriantly; other places are quite bare of it. The soil is various: in many parts a stiff arid clay, covered with small pebbles; in other places, of a soft loamy nature: but invariably, in every part near the river, it is a coarse sterile sand. Our observations on it (particularly mine, from carrying the compass by which we steered) were not so numerous as might have been wished. But, certainly, if the qualities of it be such as to deserve future cultivation, no impediment of surface, but that of cutting down and burning the trees, exists to prevent its being tilled.”

“To this river the governor gave the name of Nepean. The distance of the part of the river which we first hit upon from the sea coast, is about 39 miles, in a direct line, almost due west.”

– W. Tench, A Complete Account of the Settlement at Port Jackson, in New South Wales, including an Accurate Description of the Situation of the Colony; of the Natives; and of its Natural Productions, London, 1793, pp. 27-29

The Biggest Constant is Change

Loyal Customers…Bring them Back again and Again!