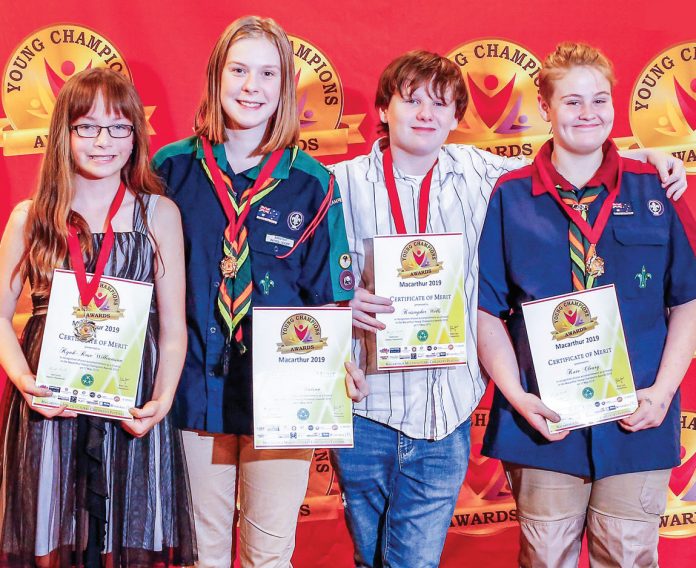 The community came together in force to honour Macarthur’s young achievers at a glittering awards ceremony at West Leagues Club. And a host of local businesses pitched in to truly make this a night to remember.

From innovations on the local school playground to a gold medal tally at the World Special Olympics, from musical prowess to a passion for inclusion and wildlife preservation, young people of all abilities who have made outstanding contributions during the year in fields such as art, sport and business were applauded by an auditorium packed with local luminaries.

As the evening’s host, Julieanne Horsman from C91.3 exclaimed, “What a gathering of goodness in a single packed room!”

Chairperson of the Awards Committee Brian Laul, proprietor of Oz Funland, said that he has initiated the Young Champions Awards as a great opportunity to highlight the collective achievements of our young people and to celebrate the contributions they make to our wider community. “We have so many talented and passionate under-18s creating positive changes and sometimes just a pat on the back, a little appreciation, can make a real difference and give them the determination to go even further,” Laul said.

Congratulating all the finalists, popular Campbelltown business entity Cr Warren Morrison, proprietor of the Sleeping Giant Campbelltown announced that a scholarship for the overall winner was soon on the cards! The stories of achievement told from stage during the night were truly inspirational.

Hamani Tanginoa uses his captivating voice and stage appearances to raise awareness about issues that especially confront those young people who are Aboriginal or identify as LGBTQI.

When asked what she wanted for her 8th birthday, Sia Uluibau asked her parents for money to feed the homeless. She then collected over 40 bags of groceries from friends which were all distributed to deserving people in Macquarie Fields.

A 14 year old who has low functioning ASD with developmental delay and sensory issues, Kristopher Wells inspires others with his dedication as troop leader for the scouts special needs unit in Campbelltown.

Hamani, Sia and Kristopher joined 15 other category winners drawn from 110 finalists. The Macarthur Young Champions Awards are an extension of the committee’s work with young people through the highly successful Macawardsarthur Multicultural Children’s Festival. This year’s Festival will be held on Sunday 25 August at Koshigaya Park, Campbelltown.

Our Advice Is – Don’t Risk It!

Getting Mobile when your Competitors stand still

Are you low on Energy and having Foggy Moments? Thoughts on...