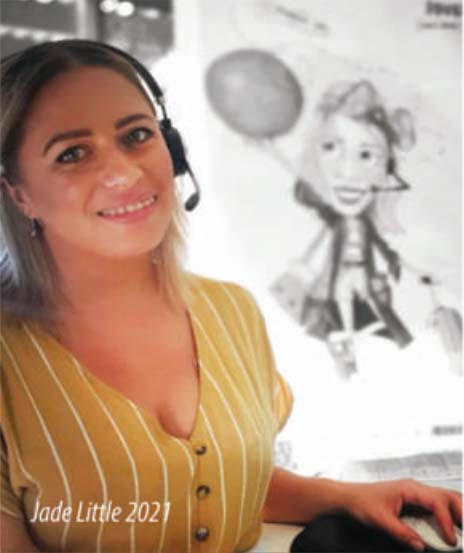 ABC News reported in June that ‘The tourism industry is facing a tsunami of business busts’ this year with the effect of Covid19.’

Macarthur tourism business owner Mrs Jade Little has found 2020 to be a demanding year for her travel agency ‘itravel with Jade’.

She said, ‘Like many businesses across Australia, the ripple effects the current COVID-19 pandemic has caused around the world over the past 6+ months has been my greatest challenge. Biosecurity measures and travel restrictions are in place to help prevent and slow the spread of COVID-19, meaning the Travel & Tourism industry was unfortunately the first to be shut down, and will be the last industry to start up again’.

Mrs Little’s outlook on one of the toughest years for business in Australia and the Macarthur region could be down to the qualities and skills that women bring to business.

Mrs Little said, ‘Women bring a different perspective to management, leadership and business. We often are the ones juggling it all, home life, work life, family life and staying healthy (and keeping everyone else healthy too) I feel that when women have drive-in business and really back themselves, a lot can (and will) happen.

Mrs Little started her Macarthur travel business itravel with Jade in 2018 after spending five years as the dance captain on P&O and Princess Cruises, and two years as a team leader working for a retail high street travel agency. ‘It also means when women are encouraging women to take risks, gain visibility, develop meaningful sponsorship and trust among peers and managers, it’s truly transformative to innovation and performance in all businesses’, she said.

Macarthur women in business have stepped up the mark and made a positive impact, clearly by the Camden Local Woman of the Year awards, first launched in 2016. The first recipient was local solicitor, owner of Coutts Conveyancing and Legal Services, Adrianna Care.

The Camden Advertiser (9 March 2016) reported that Camden MP Chris Patterson felt that Ms Care was ‘an impressive woman’ who has built a successful business. He said ‘Ms Care works tirelessly to support not only our local businesses but community groups and charities since their introduction in 2016’.

These findings concur with a study by Canadian-based management consulting firm Caliper that found that women leaders also were found to be more empathic and flexible, as well as stronger in interpersonal skills than men.

Helping the community was foremost in the mind of Jade Little. She said, ‘Giving back to the community is where businesses need to be, to stay front of mind and really give back to the local community that support them. I was a Program Coordinator for Life without Barriers Disability sector for 4 years, and am passionate about and support Bravery Buddies, Youth Solutions and the Macarthur Breast Cancer Gala.

Women have always made a significant contribution to the Camden region

Women have been an important part of the history of the local area from pre-colonial times. These stories have been hidden in the shadows of the past.

The first European woman to make a significant economic contribution to the area was Elizabeth Macarthur who managed the considerable business and pastoral interests of the Macarthur family between 1801-1805 and particularly from 1809 to 1817.

Elizabeth’s grand-daughter Elizabeth Macarthur Onslow and her daughter Sibella were important businesswomen in their own right. Their commercial network spread from Camden to Sydney, India and London and they reigned supreme in the local area from the death of Elizabeth’s husband, Captain Arthur Onslow, in 1882 until Sibella’s death in 1943. Another notable woman pastoralist was Frances Faithful Anderson who took control of Camelot after the death of her husband in 1912, followed by her daughter Clarice until her death in 1979. All these women were prominent philanthropists and served the community in a host of roles.

Other women have made significant contributions to the community through their service to charities and not-for-profit organisations in the local area. Some examples have been Rita Tucker who served the Camden Country Women’s Association, Zoe Crookston who worked tirelessly for the Red Cross and more recently Joyce Thorn, and in recent times there has been Kay Sidman’s sterling efforts helping the NSW Cancer Council. In the political arena Liz Kernohan had many firsts in the local area and at state level, and laid the groundwork for other women to follow in her footsteps.

A number of women have owned and managed small businesses in the Camden area. Women like Alice Dunk who owned and ran the Dunk’s Milk Bar at 188 Argyle Street between 1942 and 1949. Alice was a smart and determined woman who came from very ordinary circumstances without the assistance of the wealth or privilege. Shirley her daughter says that her mother ran a very successful business on her own with help after school and weekends from her two daughters. Alice started the business when her husband Walter joined the army during the Second World War. Shirley insists that the business was ‘a popular little shop’ and Alice ‘did well’, and she enjoyed a reputation for ‘making the best milkshakes in Camden’.

Alice Dunk was not on her own. Ina Cameron jointly managed the Capital Café at 95 Argyle Street with her husband Gordan and her brother and sister-in-law between 1946 and 1950. The 1948 Camden Social Survey stated that Cameron’s cafe [Capital Café] employed 4 girls and catered to the Pioneer Tourist Car. There were 4 Pioneer buses a day and a Fox tour once a fortnight. The buses usually contained 20 passengers plus the driver. The tours [were] on their way to Adelaide, Melbourne, Kosciusko and the Riverina Irrigation areas. The authors of the survey felt that ‘the number of tourists [did] not tax restaurant facilities.’ Ina said that it was a hard 4 years, although ‘I loved cooking’. (Camden History Notes) Then there is the story of Joyce Thorn who ran the Cobbitty General Store from 1948 to 1971 with her husband Keith. She recalls, ‘In those days everyone knew everyone else and there was a real sense of community’. Joyce grew up on a farm at Thirlmere without electricity and transport was a horse and buggy. Their store was the focal point of Cobbitty village and their life was their work. Joy had attended business college in Sydney and that put her in good stead for running a profitable small business, which she maintained was ‘hard work’. (Camden History Journal)

In more recent decades women have made in-roads into the bastions of male dominance and one of those was the local press. Where there were once only male owners and editors of local newspapers there have been local women. All local newspapers have had women as editors at various times: Roma Dickins at the Camden Narellan Advertiser; Mandy Perrin at the Macarthur Chronicle; Lee Abrahams at The District Reporter; and Belinda Sanders at the Oran Park Gazette. Similar in-roads have been made in law, medicine, finance and other areas.

Walking on for Fred

From humble beginnings, the WildFx Story.

Natural Remedies to d-stress in 2020