What a whopping year for the prestigious Fisher’s Ghost Art Awards – 1,100 entries in all, a spirited celebration of creativity on show at Campbelltown Arts Centre. 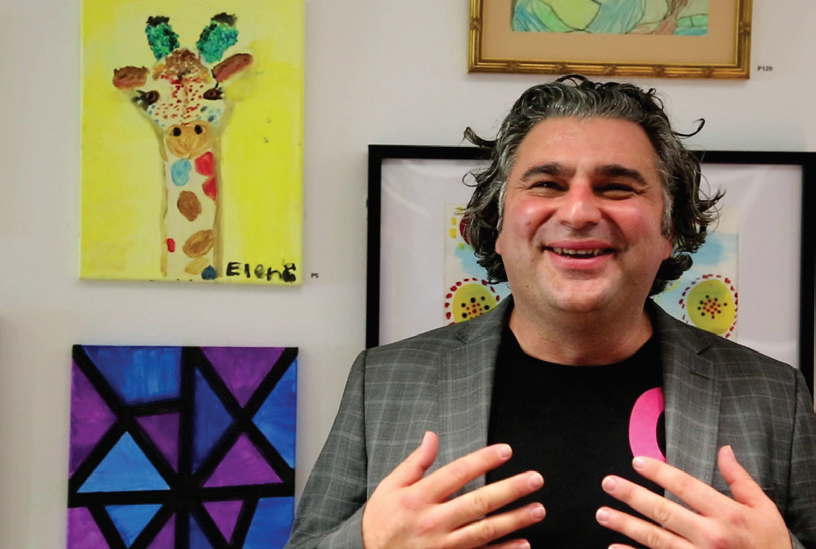 “But also the exciting thing is that there are 100 entries hung in the gallery that are from the Macarthur region!” beamed Michael Dagostino, Director, Campbelltown Arts Centre.

“We had over 300 entries from young people, from the primary and secondary schools, which is also fantastic. And everybody was hung.”

The awards night was quite literally packed to the rafters with barely any car parking within a fair distance. A happy giraffe, tortured bug and dead animal all vied for attention with quaint artistic responses and assorted portraits (including a colourfully painted State Member for Macquarie Fields Anoulack Chanthivong).

Sydney-based artist Brian Fuata bagged the coveted Open Award with its $20,000 prize. “Isn’t it fantastic how this event is growing every year? So many people and impressive works of art in such a wonderful gallery,” said Cr George Brticevic, Mayor of Campbelltown. “One of the best galleries not just in Western Sydney but in Australia!” Mr Dagostino exclaimed proudly. “But we’ve outgrown it. What we really need is another gallery double its size.”

Proper artists’ studios, rehearsal spaces, spaces where people can meet, creative hubs, could all then become a reality. “Campbelltown is a creative city and we definitely need to be able to explore that further,” Mr Dagostino feels. One of the Arts Centre’s most successful projects is the Little Orange Studio for artists with disabilities. And it’s also one of Mr Dagostino’s pet projects. 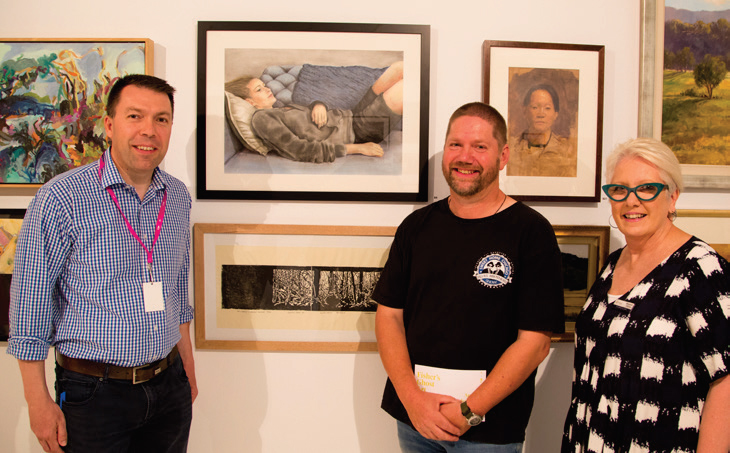 and to give them a small and very humble amount of studio space has been an impressive journey. Now they’re getting exhibitions, curators are coming to visit their work, collectors are buying, So from just that small investment, we’ve been able to achieve so much. Imagine if we had a larger canvas!” Mr Dagostino said.

The Macability Award is apparently one of the most highly contested among the Fisher’s Ghost Art Awards, won this year by Peter Gregson from Little Orange for his work Campfire & Tornadoes.

“I’ve been told that the artists who win Fishers Ghost Art Awards are really proud to put it on their resume. That it has some significance in the art world is really encouraging and gives us the impetus to grow it even further,” said Mayor Brticevic, stopping by a linocut to congratulate its maker Wedderburn artist Andrew Vanderschoor on winning the traditional award for his impression of a Tasmanian rainforest, The Creepy Crawley Nature Trail.

The exhibition continues at the Campbelltown Arts Centre till 14 December.

(Brian Laul is the founder of Oz Funland, Good Morning Macarthur, Director of the Campbelltown Chamber of Commerce and Secretary of the Children’s Festival Organisation of Australia among other things. He’s passionate about fostering multicultural relations at a community grassroots level.)

Who let the Hounds Out?

Going for gold- Getting your share of hand-outs, hand-ups and hand-shakes