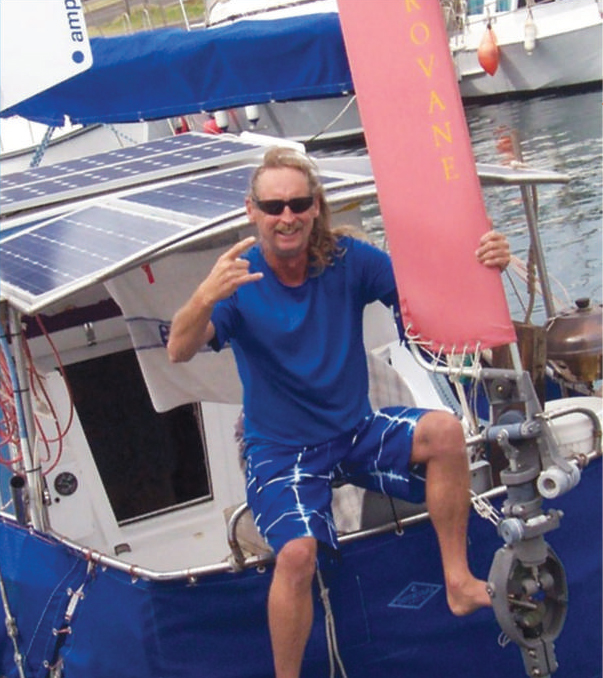 Quite a few people have sailed solo and unassisted around the globe and into history. But as yet, no born-deaf person has achievement the feat. Profoundly deaf sailor, Paul Martin, plans be the first. The first to defy the sails of silence and create awareness of the issues facing the deaf.

Profoundly deaf from birth and now in his 50’s, Paul has faced many challenges, discrimination and difficulties and feels that it is important to do something ground breaking to smash stereotyping and misconceptions around deafness.

“By taking on this voyage, I want to not only show, but prove, that the profoundly deaf can successfully carry out and complete even the most difficult tasks and should be considered for jobs and inclusion across the community like everyone else,” Paul said.

What makes Paul’s story even more remarkable is that he has already completed a solo, circumnavigation of Australia. A feat which was not without its hitches.

The first reaction of many people to Paul’s plans is what’s the big deal? Deaf people have hearing aids. For Paul, a hearing device is not a complete solution and the dangers and challenges of sailing without noise are very real.

Noises are very important to a sailor. Wind changes, waves and thunder are alerts of changing weather conditions. The sails themselves give out their own signals.

“Non-sailors don’t realise that the sound a sail makes when the wind changes, is a signal that you need to change course or change the sail set-up,” Paul explains. “I have to be totally alert to everything around me and ahead of me, relying on the visual which is obviously not possible 24/7!”

Then there are the sounds of approaching vessels, horns, marine creatures and the essential radio communications.

“I can’t use the UHF radio so I must rely on connecting with authorities via text messages,” Paul said. “In some place the signal is not great and in some locations non-existent so i can’t totally rely on it.”

Australia First, Then the World

Paul describes himself as just a regular bloke from Wollongong – father of two, carpenter by trade who loves sailing. He’s a member of Wollongong Yacht Club and competes in his 30 foot yacht, Amber Rose.

10 years ago, Paul decided to venture beyond Wollongong Harbour and embarked on his first daring voyage— to sail Amber Rose, solo, in an anti-clockwise direction, around Australia.

“No deaf person had ever done it, the time was right in my life, so I did it,” Paul said in his unassuming manner. “It was pretty hairy in parts especially when I suffered kidney stones while in 10-13 metre seas off the Northern Territory.”

Paul detailed this terrifying experience, which started on the fourth day after he left Darwin.

“The seas had risen a metre, my GPS was only working intermittently, the autopilot wasn’t working and I couldn’t find the cause so I had to spend hours hand-steering and by early afternoon I started to feel pain on my left side” “I realised it was a kidney stone and the pain got so bad, I collapsed in the cockpit 4 times.”

He managed to get the GPS working long enough to pinpoint his position, 100 nautical miles to Cape Talbot, was feeling hot and cold, sweating and getting worse. “About 1430 hours I switched on the EPIRB to let a search plan know my position,” he recalls.

“The Captain was talking to me on a loud speaker, but I didn’t understand a word,” Paul said. “So they dispatched an inflatable boat and I managed to communicate with them at this closer range, but they wanted me to leave my yacht and go with them.”

For Paul, this was a definite NO. He was not going to abandon his yacht. So the crew provided him with medication and he bravely continued, as the seas continued to rise.

“By early morning, I had only managed to sleep about 5 minutes. I was standing in the companionway, looking at the big waves and feeling extremely unwell. But with no autopilot, I had to go on deck and hand-steer with the waves at a 10 metre swell. A large wave crashed over the deck and it was like riding a roller coaster. After a while I got used to it but couldn’t stay on deck as the sea was just too big. I just had to ride it out,” Paul recalls.

The voyage took 13 months as Paul stopped along the way but his next big adventure will be non-stop and unassisted and driven by a clear objective.

“After working in the building trade all my life I was recently laid-off for reasons I believe were to do with my deafness,” Paul said. “I haven’t been able to find work so why not use this time to do something even more worthwhile and create awareness through a history making voyage.”

A Not So Silent Statement

Paul is planning to be the first born-deaf
sailor to sail around the world non-stop,
solo and unassisted aboard his yacht, Amber Rose. The planning alone for

such a voyage is a complex and involved process and Paul is well aware that you have to plan for all eventualities, especially the unexpected.

“I’m certainly not under-estimating the dangers,” Paul said. “I learnt a lot on my Australian trip but know very well there are a lot more hazards in major shipping lanes in the world’s most treacherous oceans.”

But before any of that, Paul first has to raise the funds to cover expenses.

“When I circumnavigated Australia I funded the adventure myself” Paul explained. “But being laid off has made a hit to my back pocket.”

Paul is reaching out for public support and looking for sponsors who share is ideals and objectives.

He acknowledges great work is being done to assist the deaf but he also knows from personal experience, the battle is definitely not won.

“I don’t think employers especially, intentionally discriminate against the deaf. I think it’s more a general nervousness and the unknowns of how employing a deaf person will work in their business.”

“We need more education and greater awareness to change the stereotypical characterizations and establish the reality that a deaf person is quite able to undertake the same tasks as a non-deaf person.”