Campbelltown City Council has unveiled it’s plan to create ‘Australia’s Greenest City’ as it kick-starts a new employment and investment initiative aimed at attracting, and supporting, the next generation of jobs, homes and lifestyle, for one of the fastest growing economic regions in the country.

Following the recent Western Sydney City Deal, a tri-level agreement with federal, state and local government, which set a target of 200,000 new jobs across the region, Council, has released a bold vision for it’s future, in front of Sydney’s leaders in government, business, tourism, health, education and sport, at NSW Parliament House.

Mayor of Campbelltown, Cr George Brticevic said Re- Imagining Campbelltown, a draft strategy prepared by Deloitte in partnership with Council, had been developed to help ensure the city, and broader Macarthur region, was positioned to leverage the growth, investment and opportunities of the future.

The draft report compiled by one of the world’s leading consultants, suggests that Macarthur will be home to an additional 800,000 within the next 25 years.

“In order to support this population explosion, we need to start planning for the necessary infrastructure, jobs, and homes, now. Doing nothing is not an option,” Cr Brticevic said.

“Campbelltown has today put its hand up and said it’s prepared to meet these growth targets head on. We can’t afford to just sit back and wait for growth to overtake us – we need to get on with the job of planning and building a city that people will want to invest in, want to live, and want to visit.

Cr Brticevic said today marked the start of a new era for Campbelltown as a place of opportunity, innovation and collaboration.

Council has commenced a program of engagement with community, business, and government, seeking their feedback on the draft report, to ensure its future plans are communicated widely, to a variety of stakeholders.

To address the fact that two thirds of employed residents leave the local area every day for work, and to attract, and retain skilled workers and business, the first stage of Re-Imagining Campbelltown is focused on the creation of more activated, connected and sustainable places, in Campbelltown CBD.

“The creation of green spaces, and inspirational places that showcase local arts and culture, will be at the forefront of our planning decisions, not an after-thought,” Cr Brticevic said.

“We want to build Australia’s greenest and most sustainable city – a place that is attractive for young professionals, that fosters innovation and encourages industry collaboration. The good news is that we have the structures in place to make it a reality.”

More than 70 per cent of Campbelltown is natural environment, and this will feature strongly in how the future design of the urban centre is developed in future stages of the project.

Other initiatives aimed at building an attractive, sustainable and prosperous CBD, include:

“With our massive spike in population, in addition to Australia’s biggest infrastructure project – the Western Sydney Airport – a stone’s throw away, there is a great opportunity to re-shape our city and capitalise on the public, and private sector interest that is happening across the region,” Cr Brticevic said.

“To do that we need to build a place that appeals to young millennials and to big corporates which are looking to leverage the opportunities, and growing talent-pool that exists in Campbelltown and beyond.”

Campbelltown City Council will officially launch its strategic vision for a new health and education precinct, bringing together medical science, research and education, as a way to fuel jobs growth while also improving local health outcomes.

“By assembling a critical mass of co-located research, teaching and clinical services, the Campbelltown Health and Education precinct can establish itself as one of Australia’s leading innovation districts,” Mr Stokes said.

“Education and health is no longer just about service delivery, they are important urban and economic drivers, particularly in the Macarthur region, where there is a strong agglomeration of health and education providers.”

Mayor of Campbelltown, Cr George Brticevic, said health and education was the city’s largest employer, currently accounting for almost 30 per cent of all jobs.

“Health and education is at the centre of our growth story, and by building on our existing partnerships with Campbelltown Hospital, Western Sydney University, TAFE NSW and other industry leaders, we have an opportunity to develop a nationally recognised centre of research, medicine and health,” Cr Brticevic said.

At 400 hectares, the Campbelltown Health and Education Precinct, 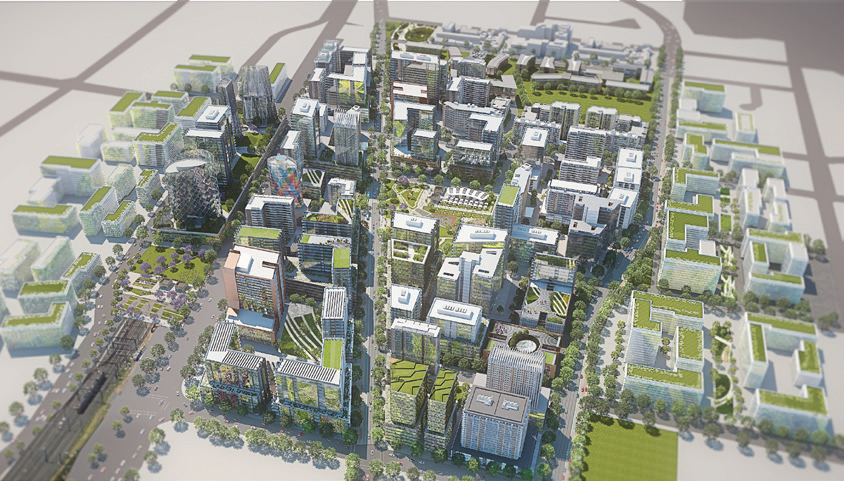 which will include Campbelltown Hospital, Campbelltown Private Hospital, and the Macarthur Clinical School, is the largest of Western Sydney’s five health and education precincts.

There will also be opportunities for the precinct to connect to the nearby WSU campus, TAFE NSW campus, as well as potentially link to future business parks, and the city’s commercial and retail centres.

“In addition to the generation of more concentrated smart jobs, the health and education precinct will provide an environment that has the potential to act as a catalyst to attract industry and employment opportunities that ensure we can continue to develop and retain the next generation of local leaders,” Cr Brticevic said.

Do Your Bit for the Farmers