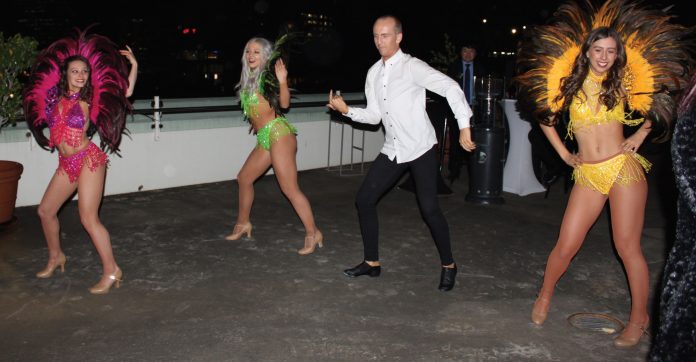 A wonderful night of celebrations for Christian Fox Accountants!

The first of its kind, the event, for over 150 invitationonly guests was primarily to celebrate working partnership of Christian Fox Accountants (Andre Christian) in Parramatta with Condon Associates Group also included a number of other extremely worthwhile purposes.

“This was our first “Big Night Out” and so we included a number of reasons to celebrate,” Andre Christian of Christian Fox Accountants said. ”We made known our business expansion with our Parramatta offices, supported several local charities, included a tribute to Long Tan Veterans, especially the late John Burkitt Lyon.”

The late John Burkitt Lyon was a friend and client of Christian Fox Accountants, a Vietnam Vet, Pilot, past president of the Liverpool Chapter of SWNG and much admired local Ingleburn resident.

“The event was our first foray into the Parramatta business community and came together with the exceptional help and support of Schon Condon and his team at Condon Associates Group,” Andre said.

Andre explained that the group intend this to be the most anticipated annual event for the Parramatta Business and Professional community, celebrating respected business associations and networking relationships while having a great time in a great location with a classic ambience.

The night was the culmination of hard work by the marketing staff of Christian Fox and Condon Associates headed by Monique Hannan and Tanja Stancevic and included a stellar line-up of speakers and entertainment.

Monique Hannan hosted the event, while guest speaker The Honourable Pat Farmer accompanied by his wife Tania, gave a recital of the Battle of Long Tan and the Ode.

Under the big tent, the entertainment was impressive with the 12 piece Cohesion Big Band heading the bill, supported by singer Tanya Bianchi and the Step Up Entertainment dancers and the food by chef Gordon Norman, equally amazing!

Editor’s note: We have received several emails from local business owners delighted to have been introduced to Christian Fox Accountants via the magazine, and are delighted to benefit from Andre’s column in Smarter Advice, and sharing in his journey of success!

Managing Stress…Stressed out, overworked and overwhelmed?